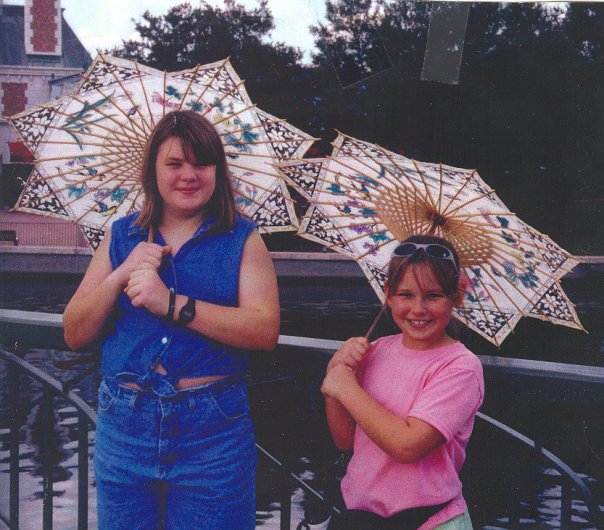 When I first noticed the 90s creeping back into our mainstream culture, I resisted it hard. I remember walking through Target seeing crop tops, jean skirts, scrunchies, and those plastic black chokers and I immediately became uncomfortable. I didn’t understand until I got home that I was NOT mentally or emotionally prepared to be reminded of the 90s. I, as many, many people did, experienced a lot of trauma in the 90s which I’ve been working on in therapy for some time. Friends shirts, clear mini bubble backpacks, and plaid skirts with a slit on the side (a la Clueless) all overwhelmed me with images of my childhood, particularly the not so good ones.

I resisted the 90s style for so long. I remember wearing clothes that my classmates mocked me for, regularly. And now those styles are trendy and cool and available at your nearest Target. I didn’t realize how deep of an issue this is for me. It revitalized the moments when I felt most alienated and scared. It reinvigorated the embarrassment I felt when someone would tease me and the entire class would laugh at me. I never really felt like I belonged. I wasn’t invited to birthday parties, cool sleepovers, or even to sit together at lunch. Only one person showed up to my eight year old birthday party though I had invited my whole class as well as people from other classes. I remember holing up in bathroom stalls to eat my lunch because I couldn’t bear the anxiety of asking to sit next to people at the lunch-table when I knew people would say what they always did: they laughed, looked at their gaggle of friends and said someone was already sitting there. Which they weren’t.

Now that I’ve realized where that anxiety and trepidation originated from, I’m a bit more open to “Spice” colored lipsticks, baggy overalls, and yes, even fanny packs. I purchased one not too long ago to try it out, but I still feel like some asshole wealthy kid will make fun of me. I just remind myself that is no longer me. It was a part of my story, but it’s not my current story. It’s so empowering to pump myself up with the knowledge that I have evolved from that lonely, Xena-yelling-on-the-playground, nerd. I’m sure those kids who were mean had struggles of their own at the time, and almost certainly do now. I’m still nerdy as HAY-ELL but with a lot less fucks to give.